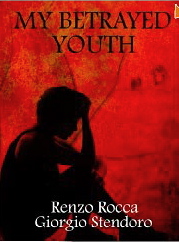 The repulsion, disgust and shock of pedophilia narrated without censure. The atrociousness of a story (fiction) that amazingly manages, when possible, to give the impression of serenity, with constant signs of hope that convert gloom and desolation into the prospect of a new life.

The account of 13 year old Gianni Caccini, the main character of MY BETRAYED YOUTH, unwinds over a ten year period, in a labyrinth of squalid rooms in the slums on the outskirts of Milan; in the luxury of Milan; Lugano, Switzerland; Lake Como; the magical splendor of Tuscany and hilltop town of Cortona; the ancient forests of Brazil; Mumbai India;

and the breathtakingly beautiful beaches of Sri Lanka. We accompany the sexually abused, permanently psychologically scarred adolescent Gianni from age13, to a promising 24 year old university student. We recognize his suffering and pain, consequence of the sexual abuse and violence he suffered from “that damned pedophile Paolo”, partner and companion of Gianni’s mother Elisabetta.

At 24, a beautiful and emotionally secure Sandra enters his life with a positive force that Gianni has never experienced: love. When their platonic love is transformed into scenes of elegant passion, this narration gives the reader (and Gianni) hope for his future. Thanks to a continuous series of flashbacks, we are reluctantly involved with Paolo’s contorted psychological makeup and pathological personality. This is not a tale of pedophilia but rather the total reality of a pedophile. The narration is transparent, no holds are barred; terminology is powerfully realistic when tormentor and victim are involved.

The authors, clinical psychologists and psychotherapists for over twenty five years have entwined reality and fantasy, as well as humor, into graphic scenes of mortification and shame, painfully brutal but real when Gianni is alone, sexually abused in his own home, perpetrated by his own family. Two common denominators in this narration are love and destiny.

Finally justice is served. In time Paolo the pedophile is punished with a rare and unpredictable violence that sweeps away the nightmare he had chosen as a way of life. But not with the gratuitous hate that the reader might have logically invoked early on in the novel. Pedophilia is not a crime against morality, it is a crime against a human being, and those crimes Paolo committed during his lifetime are his frightful legacy; the horrific reality of the evil he leaves behind can and never should be forgotten.

This website uses cookies to improve your experience while you navigate through the website. Out of these, the cookies that are categorized as necessary are stored on your browser as they are essential for the working of basic functionalities of the website. We also use third-party cookies that help us analyze and understand how you use this website. These cookies will be stored in your browser only with your consent. You also have the option to opt-out of these cookies. But opting out of some of these cookies may affect your browsing experience.
Necessary Sempre abilitato
Necessary cookies are absolutely essential for the website to function properly. This category only includes cookies that ensures basic functionalities and security features of the website. These cookies do not store any personal information.
Non-necessary
Any cookies that may not be particularly necessary for the website to function and is used specifically to collect user personal data via analytics, ads, other embedded contents are termed as non-necessary cookies. It is mandatory to procure user consent prior to running these cookies on your website.
ACCETTA E SALVA
X